Revenue generated by China’s game market grew 20.1% YoY to Rmb208.02bn over 1–3Q20, with revenue from mobile games accounting for a 75% share. There was a rise in both the number of active gamers and the amount of time spent on playing games. 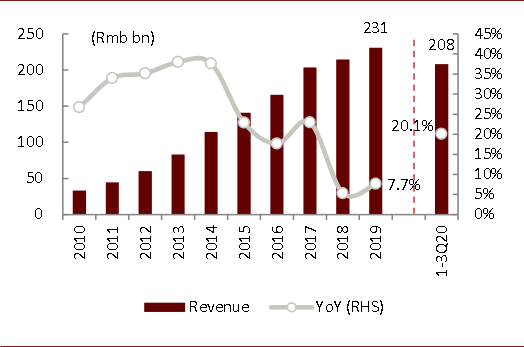 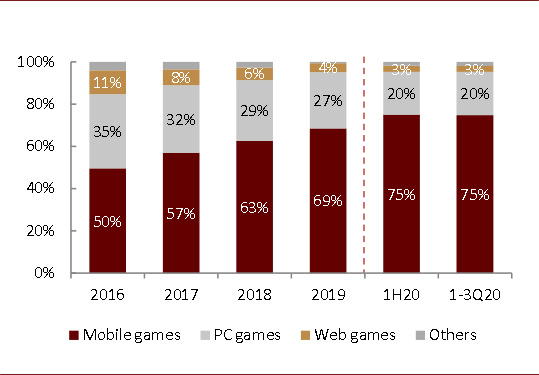 While this number could gradually slow and stabilize, it is worth noting that even after average revenue per user (ARPU) generated by mobile games grew 36.4% QoQ in 1Q20, it still rose 2.6% QoQ to Rmb78 in 3Q20, which could indicate strong growth potential.

Going forward, ARPU generated by mobile games could continue to grow and the mobile game market may further expand. This is as users are increasingly willing to pay for games and the quality of games is improving.

In addition to issuing new licenses for games, NPPA has also revoked licenses for 19 existing games that violated related rules since September, in an effort to strictly control the quality of games. Meanwhile, NPPA released information about changes of operators, publishers and names of some games that gained regulatory licenses over 2015–2020.

The trend toward higher quality games

The number of regulatory licenses for online games has declined as gamers pay greater attention to the quality of games.

Figure 3: The number of R&D employees has risen at most leading listed game companies

Note: Companies in the above figure are top 5 companies by market cap in the CITIC game sector index as of November 6, 2020; R&D employees of Century Huatong increased markedly in 2019 due to the acquisition of a game company; R&D employees of Sanqi Interactive decreased in 2018 due to the disposal of auto parts business
Source: Corporate filings, CICC Research

Data from Analysys shows that the combined market share of Tencent and NetEase stood at 69.8% in 1H20, slightly higher than in 1H19. It is worth noting that revenues and recurring net profits of some leading game companies have achieved higher-than-average growth.

Going forward, leading game companies could potentially see their market share rise further, as they continue to increase R&D spending and improve the quality of their titles.