When talking about the rise of China, its economic growth is usually front and center. But underpinning this growth is a myriad of factors that shape the country’s industries.

Here we look at what’s really driving China’s travel industry – both domestic and outbound – and highlight the rapid changes that have taken place.

These could have an impact for years to come.

China’s transport infrastructure has gradually improved alongside the country’s overall development, and “express transport” (expressways and high-speed railways) is an area that has seen faster growth, facilitating travel around the country.

“Length of high-speed railways grew at a 46% CAGR over the past 10 years.”

According to the National Bureau of Statistics, the length of expressways and high-speed railways increased at CAGRs of 9.7% and 46% over the past 10 years. High-speed railways (China’s very first was launched in 2008) account for roughly 22% of the total length of railways and 60% of railway passenger traffic.

If we only consider China’s level of infrastructure development east of the “Hu Line” – an imaginary line named after its creator which cuts across the country diagonally to divide it into two roughly equal areas – China’s transport infrastructure density is comparable to that of developed countries.

Figure 1: Only 4% of the population lives in the 64% of the country’s land area west of the Hu Line, also known as the Heihe-Tengchong Line 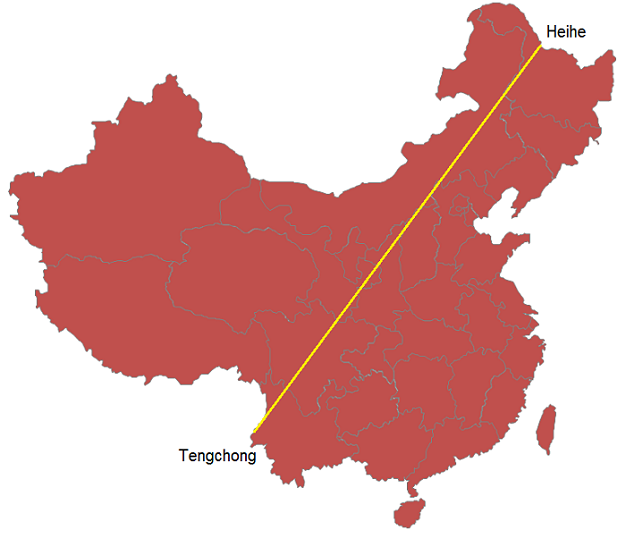 “96% of China’s population lives east of the Hu Line”

As for China’s railways, its network density has reached 132km/10,000km2 (in eastern China: 266km/10,000km2) – for comparison, the US’s level is at 160km/10,000km2. China plans to build even more high-speed railways and this could further facilitate domestic travel and provide a boost to the overall travel industry.

For example in Japan, the domestic travel market grew at an annual rate of about 6% over 1980–2000 and overseas travel grew at a rate of 8%. Data from the US shows a similar story.

China also has an aging population and has seen the number of children per family decline. Over the past 50 years, the country’s proportion of children under the age of 14 has fallen from 41% to 17%, while the proportion of those over the age of 65 has grown from 4% to 12%. The Office of the China National Committee on Aging predicts that these two trends may continue for another 20 years, based on assumptions on birth and mortality rates.

Figure 3: China’s aging population and its declining number of children per family 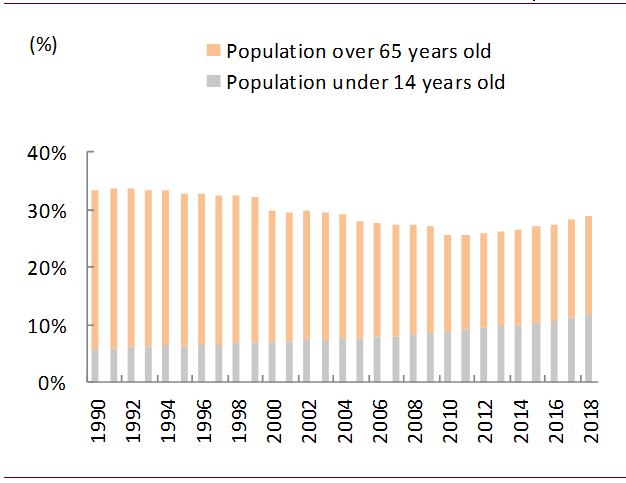 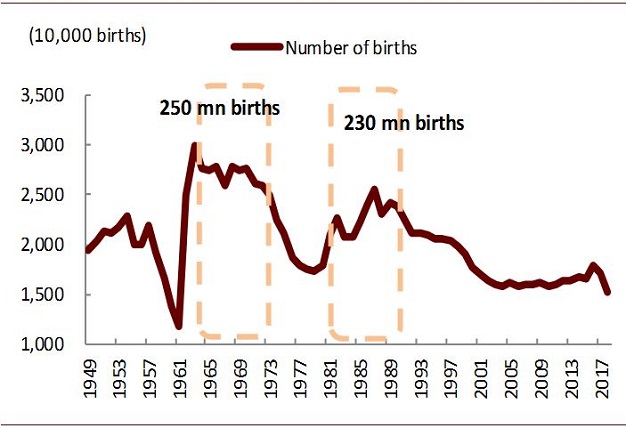 For comparison, Japan has an urbanization rate of 90%, and people there made an average of 5.3 long-distance trips in 2017.

Figure 5: Number of long-distance trips per capita per year in China’s urban and rural areas, and Japan

Figure 6: Spending per capita per long-distance domestic trip in China’s urban and rural areas, and Japan 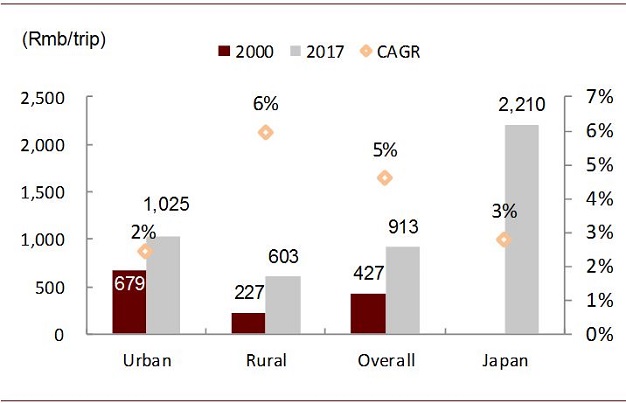 On the back of China’s economic development, a number of countries such as Canada, Japan, Thailand, the UK and Australia have relaxed their visa policies for Chinese citizens since 2017. Specific measures include simplifying the visa application process, shortening the processing time, raising the approval rate, and lengthening the visa validity period.

At the same time, the number of countries that allow Chinese citizens to visit without a visa or can apply for one on arrival has grown. The number jumped from 43 in 2010 to 72 in 2019.

It has also become easier to apply for visas in China’s tier-2 cities. While in the past many countries had consulates only in tier-1 cities, the UK, Canada, France, Switzerland, Italy and Germany, among others, have set up new visa application points in tier-2 cities such as Shenyang, Xi’an, Jinan, Wuhan and Fuzhou to attract Chinese tourists.

Another factor that could make it easier for Chinese citizens to travel abroad is they no longer need to submit their household registers when applying for exit-entry documents. The application process has also been simplified: photo collection, fingerprint collection, application submission, face-to-face verification and document payment can be done at the same time and at the same place.

Still, the percentage of passport holders in China is still low compared to developed countries (76% in the UK, 42% in the US, and 25% in Japan), which indicates there could be further room to grow.

Figure 7: Percentage of passport holders in China and developed countries in 2017 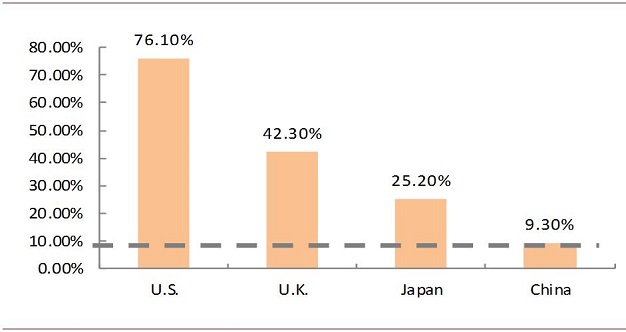 This, along with the growth in total spending on long-distance travel (and related sectors) by Chinese households could create structural opportunities in many areas for years to come.