To cushion the impact of the COVID-19 outbreak on the economy, China has increased its support for infrastructure construction.

Historically, infrastructure investment has served as an important tool to stabilize economic growth. Following the COVID-19 outbreak, China’s Politburo on February 3 proposed increasing investment in new projects and accelerating project construction to mitigate the impact of the outbreak.

The government then rolled out a series of counter-cyclical adjustment policies such as raising the deficit ratio, issuing special treasury bonds, expanding quotas for special local government bonds, renovating a growing number of old residential sites, and accelerating the construction of “new infrastructure” and major projects.


Infrastructure investment is poised to accelerate

To highlight China’s determination in boosting infrastructure investment, a government work report delivered on May 22 proposed expanding effective investment and giving strong support for the construction of “new infrastructure,” “new urbanization” and major infrastructure facilities such as transport and water conservancy.

China plans to issue Rmb3.75trn worth of special local government bonds in 2020, up Rmb1.6trn YoY. The country also intends to issue Rmb1trn of special treasury bonds, and 70% of the proceeds are reported[1] to fund infrastructure construction. China’s budget deficit ratio rises 0.8ppt YoY to 3.6%.

The May 22 government work report also proposed promoting a sustained decline in the interest rate and guiding the TSF growth in 2020 to surpass the growth in 2019.

In 5M20, TSF growth reached 58.6% YoY, indicating that monetary conditions remained loose. Furthermore, at a meeting on June 17, the State Council said financial institutions need to reduce charges and help enterprises save Rmb1.5trn.[2] These efforts could potentially further push down the interest rate, which could benefit infrastructure project loans and support infrastructure investment.

Safety testing of existing homes could potentially be another area of growth for the construction industry, as it appears that China has switched its policy focus from demolition, to the renovation of old buildings.

For example, while China demolished about 6mn homes in shanty towns per annum over 2014–2018, the number of planned demolitions fell to 2.85mn homes in 2019. In addition, the country renovated around 19,000 old residential sites in urban areas in 2019, affecting 3.52mn households. It plans to renovate another roughly 39,000 old residential sites in 2020, affecting almost 7mn households, which could present opportunities for the safety testing market.

Given this possible shift toward renovation, existing homes will have a longer average lifespan and regular safety testing could be of vital importance.

Figure 4: The market for existing buildings is expanding 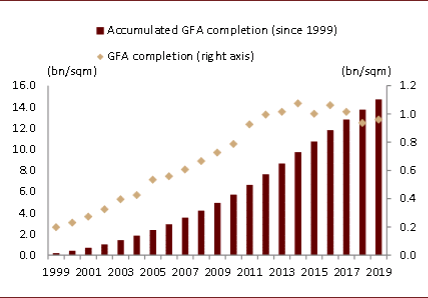